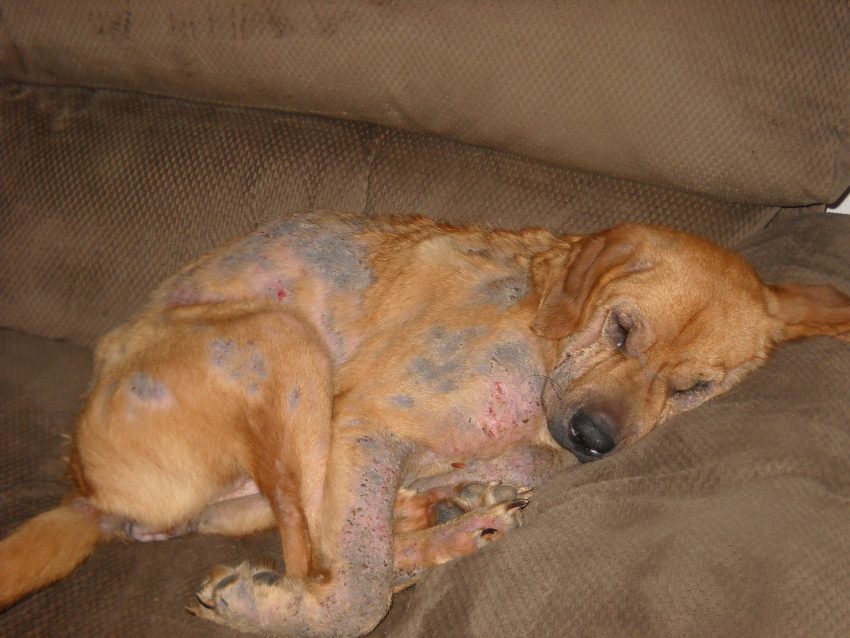 Mange is a parasitic infestation of caused by microscopic mites on the skin of animals. Common symptoms include hair loss, itching and inflammation. Mange is most commonly found in dogs and other canines, but it can occur in other domestic and wild animals.

The mites embed themselves in the hair follicles or skin, depending on the type. Both detection and treatment can be difficult and generally require consultation with a veterinarian.

Two types of mites produce canine mange, and each type has characteristic symptoms.

Also called demodicosis or Red Mange, demodectic mange in dogs is caused by a sensitivity to and overpopulation of parasitic mites as the animal’s immune system is unable to keep the mites in check. This is a mite that occurs naturally in the hair follicles of most dogs in low numbers around the face and other areas of the body. In most dogs, these mites never cause problems. However, in certain situations, such as an under-developed immune system, an impaired immune system, intense stress, or malnutrition, the mites can reproduce rapidly, causing symptoms in sensitive dogs that range from mild irritation and hair loss on a small patch of skin to severe and widespread inflammation, secondary infection, and–in rare cases–a life-threatening condition. Small patches of demodicosis often correct themselves over time as the dog’s immune system matures , although treatment is usually recommended.

Minor cases of demodectic mange usually do not cause much itching but might cause pustules on the dog’s skin, redness, scaling, hair loss, or any combination of these. It most commonly appears first on the face, around the eyes, or at the corners of the mouth, and on the forelimbs and paws.

In the more severe form, hair loss can occur in patches all over the body and might be accompanied by crusting, pain, enlarged lymph nodes, and deep skin infections.

Demodectic mange is not generally contagious to people, other animals, or even other dogs (except from mother to pup); these mites thrive only on very specific hosts (dogs) and transmission usually occurs only from the mother to nursing puppies during the first few days after birth. The transmission of these mites from mother to pup is normal (which is why the mites are normal inhabitants of the dog’s skin), but some individuals are sensitive to the mites, which can lead to the development of demodectic mange.

Demodectic mange also occurs in other domestic and wild animals. The mites are specific to their hosts, and each mammal species is host to one or two unique species of Demodex mites. There are two types of Demodectic mange in cats. Demodex cati causes follicular mange, similar to that seen in dogs, though it is much less common. Demodex gatoi is a more superficial form of mange, causes an itchy skin condition, and is contagious amongst cats.

Minor, localized cases are often treated with medicated shampoos and not treated with agents aimed at killing mites as these infestations often resolve within several weeks in young dogs.

Demodectic mange with secondary infection is treated with antibiotics and medicated shampoos as well as parasiticidal agents. Amitraz is a parasiticidal rinse that is licensed for use in many countries for treating canine demodicosis. It is applied weekly or biweekly, for several weeks, until no mites can be detected by skin scrapings.

Demodectic mange in dogs can also be managed with ivermectins, although there are few countries which license these drugs, which are given by mouth, daily, for this use. Ivermectin is used most frequently; collie-like herding breeds often do not tolerate this drug due to a defect in the blood-brain barrier, though not all of them have this defect. Other avermectin drugs that can be used include doramectin and milbemycin.

Cats with Demodex gatoi must be treated with weekly or bi-weekly sulfurated lime rinses. Demodex cati is treated similarly to canine demodicosis. These mites dig into and through the skin, causing intense itching and crusting that can quickly become infected. Hair loss and crusting frequently appear first on elbows and ears. Skin damage can occur from the dog’s intense scratching and biting and secondary skin infection is common. Dogs with chronic sarcoptic mange are often in poor condition.

Affected dogs need to be isolated from other dogs and their bedding, and places they have occupied must be thoroughly cleaned. Other dogs in contact with a diagnosed case should be evaluated and treated.

There are a number of parasiticidal treatments useful in treating canine scabies. Sulfurated lime rinses applied weekly or bi-weekly are effective. Selamectin is licensed for treatment by veterinary prescription in several countries; it is applied as a drip-on directly to the skin. Unlicensed, but frequently used, ivermectin, given by mouth for two to four weekly treatments; this drug is not safe to use on some collie-like herding dogs, however. Other avermectin drugs are also effective, but none is licensed for use on dogs.

Veterinarians usually attempt diagnosis with skin scrapings from multiple areas, which are then examined under a microscope for mites. Sarcoptes, because they may be present in relatively low numbers, and because they are often removed by dogs chewing at themselves, may be difficult to demonstrate. As a result, diagnosis in Sarcoptic mange is often based on symptoms rather than actual confirmation of the presence of mites. A common and simple way of determining if a dog has mange is if it displays what is called a “Pedal-Pinna reflex”, which is when the dog moves one of its hind legs in a scratching motion as the ear is being manipulated and scratched gently by the examiner; because the mites proliferate on the ear margins in nearly all cases at some point, this method works over 95% of the time. It is helpful in cases where all symptoms of mange are present but no mites are observed with a microscope. In some countries, a serologic test is available that may be useful in diagnosis.

For demodectic mange, properly performed deep skin scrapings generally allow the veterinarian to identify the microscopic mites. However because the mite is a normal inhabitant of the dog’s skin, the presence of the mites does not conclusively mean the dog suffers from demodex. Rather abnormally high numbers of the mite are more useful. In breeds such as the West Highland White Terrier, relatively minor skin irritation which would otherwise be considered allergy should be carefully scraped because of the predilection of these dogs to demodectic mange. Skin scrapings may be used to follow the progress of treatment in demodectic mange. 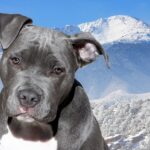 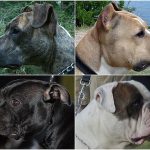 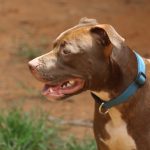 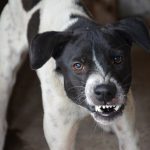